Many things stand out in the memory after a trip of this nature but two in particular are etched in my mind. The first is the sight of a European bison walking slowly out of a pre dawn mist across a snowy meadow in Bialowieza forest, the powder snow being kicked up as he walked on. Truly an animal in its natural environment doing what his kind had done for millennia.

The second is a tracking story, on route to the special reserve inside Bialowieza forest we came across the fresh tracks of a red deer. Associated with these tracks was what appeared to be urine which was staining the snow red. Two possibilities could cause this stain, blood being the obvious one, but red deer will often eat lots of willow bark in the Winter which can apparently also colour their urine.
We where on route to the special reserve and so tracking this animal would have waited where it not for two other things occurring, firstly fresh wolf tracks where found converging on the deer trail and both trails seemed to be of a similar age. Secondly a myriad of ravens could be seen some circling and some feeding on something in the meadow.
Both trails led in this direction and we couldn’t resist, following up we found the dead and partially consumed carcass of a red deer hind. That it was the same animal whose tracks we had picked up earlier there seemed little doubt. The final struggle was evident with a mass of wolf and deer tracks on a large area of trampled snow. The tell tail spray of red urine evident in a circle around the point of struggle linking the dead deer in front of us with the trail we had found earlier.
Knowing that sea eagles in the forest mostly feed on carrion sneaking up on the carcass on our return trip gave us great views of an adult and juvenile making the most of this winter wind fall.

To read the drama of the forest in such graphic detail was a privilege and a reminder of just how absorbing and informative tracking can be. Whether the colour in the urine was blood and that the animal was already sick and weak we can only speculate. It does seem odd however that a normally gregarious herd animal should be alone in the forest. Perhaps unable or unwilling to stay with the herd the opportunistic wolf had scented weakness and taken advantage of it. Either way the deer didn’t run for long before it was overtaken and brought down. 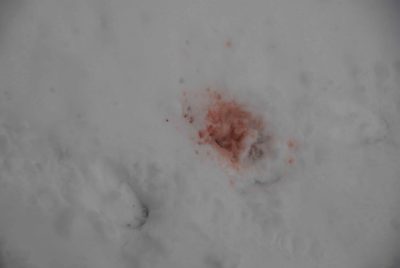 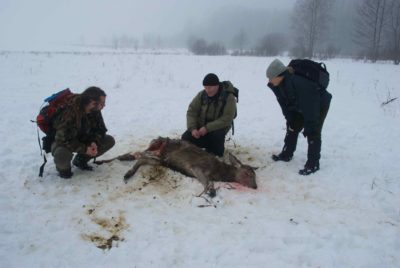 The whole experience in this remarkable country exceeded expectations and we managed sightings or found the tracks of most of the mammals we had hoped for including, roe and red deer, wolf, martens, wild boar, raccoon dog, elk and bison. In Biebrza marshes we also managed sightings of beaver, otter, mink and elk in addition to many of the species already described. We where able to follow the trail of a wolf pack for one and half hours and armed with or knowledge of track patterns we could interpret what they had been up to. With the keen eyes of Lukasz our guide and ornithologist we also had great views of many bird species including sea eagle, buzzard, waxwing, bull finches in huge flocks and the magnificent black woodpecker. 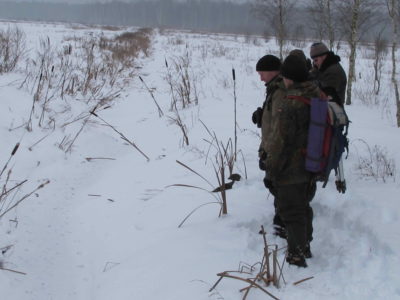 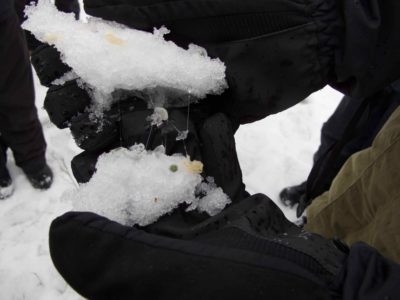 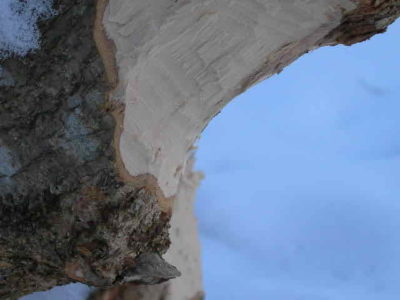 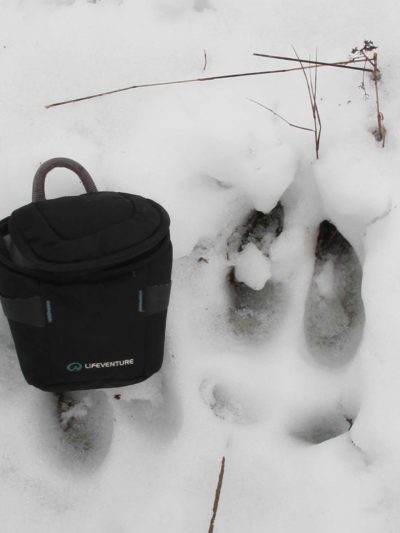 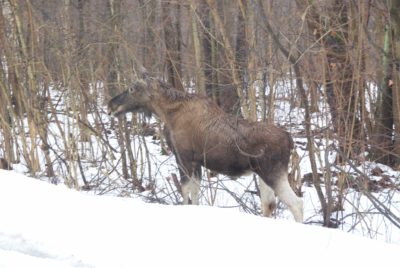