Without doubt ‘shelter’ is one of the prime considerations when spending any time outdoors. Arguably it starts with ensuring you’re properly fed and hydrated, next you may consider that you have adequate clothing to meet the environmental conditions that you find yourself in. Finally, as most people perceive it, somewhere cozy to spend the night or sit and make things or cook, generally ‘a home from home’.

This article is not written as a ‘how to’ article but instead asks questions based around observations of building these types shelter over many years.

Many of us, myself included, began a study of the subject of bushcraft thinking primarily that shelter, like so many things in the subject was best fashioned from the wilderness around you and anyone out there in a tent wasn’t quite doing it properly. Further, the main natural shelter of choice, at least in my part of the world had to be the debris shelter.  These come in many different shapes and sizes, the general format is a framework of sticks providing the basic shape and outline of the shelter followed by more sticks as rafters tightly packed and generally leaning up against this framework.  The final part of the puzzle consists of piles and piles of leaf mold built up in significant depth against this framework. The amount of leaf mold needed to make the shelter warm but also waterproof is often considerable.

Having built many of these shelters myself and personally witnessed the creation of hundreds on my courses I can’t help wondering if they are really worth all of the effort involved. Not to mention the significant impact they can have on the local environment.

I’m often slightly troubled as frequently these types of debris shelter are described as emergency or survival shelters. If we look very briefly at some of the criteria needed to satisfy shelter requirements in an emergency, we quickly realise that retention of as many calories and as much water as possible would be of prime consideration. Often times the construction of an elaborate debris shelter would seem to go against this concept.  I have often witnessed 6 to 8 people building shelter space sufficient to sleep half that number and spending three or four hours of relatively hard labour to achieve their goal. Assuming a lack of food and water which may occur during an emergency this could be a real issue. You might be lucky if your ‘emergency’ happened in the wintertime after a heavy fall of fresh leaves to form the right thatching the roof of your structure but later in the season when the various  bugs, bacteria and fungi have had their go, this time span of collecting can be seriously extended as there is even less material available.  Add even more time if proper beds are constructed. It would seem, in many situations, one could rapidly find oneself expending more energy building a shelter than is saved from the protection it provides.

I can’t help wondering that it would be better to go into the outdoors armed with the knowledge of how we lose heat to the environment. With this knowledge perhaps, calories and water can be saved by constructing something far less elaborate, perhaps using natural features and more relevant to the immediate environmental threat, instead of walking into the outdoors with several elaborate designs in your head already to deal with any real or perceived misfortune.  Perhaps this could at times be as simple as lighting a really big fire, getting off the cold ground and putting in your back against a natural feature to cut the wind. I can’t help thinking that many of the shelters described in books are better suited to long-term living in the outdoors when this time is planned and not the result of some mishap.

The other side to this mental argument I have is the environmental impact. This is perhaps more relevant for those of us don’t move around during the course of our activities. Maybe it’s running bushcraft and survival courses in the same area, or maybe it’s just the land you have access to and frequently visit. But there is considerable damage done when shelters are repeatedly built in the same location. I also think some sites would be damaged even if used only occasionally.

This damage is especially likely when using leaf mold as thatching. I know it is possible to use other materials for this job however in many areas it is the only material that is available in sufficient quantity. Most other alternatives that spring to mind are likely to be even more environmentally damaging or highly flammable.

Trees form complex relationships with fungal hyphae which bond to the roots of host trees in a symbiotic exchange of nutrients and minerals. These mycorrhizal fungi are often in the top layer of soil and into the leaf mold. Any scraping activities as we gather our roofing materials exposes them to the drying effects of wind and sun and frost.

I’m fairly convinced of the possibility of widespread disruption to invertebrate life, often times the area immediately surrounding a completed shelter is nothing more than mud, with the protective and warming leaf mold layer completely removed. Coupled with the real chance of destroying or disturbing any young seedlings, the impact of a relatively small shelter can be quite extensive.

Despite my negative thoughts about the relevance of elaborate shelters and about their impact, it is undeniable that there is a certain satisfaction to be able to walk into a forest with a minimal amount of equipment on your back and fall asleep in front of the fire in a “house” of your own construction. However it does seem that the bulk of my clients when shown the versatility of a simple tarp or tarp and hammock combination tend to stick to these as a lightweight option. With this in mind I often feel quite guilty about teaching the subject because of the amount of time it uses in a course. I cannot help thinking that time might be better spent learning something else. 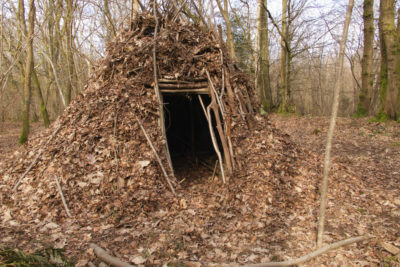 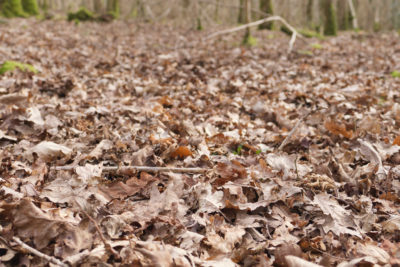 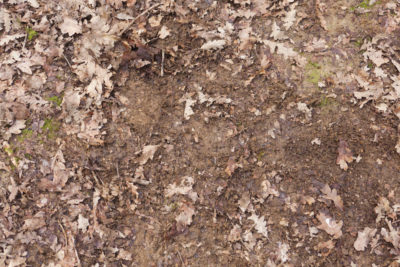 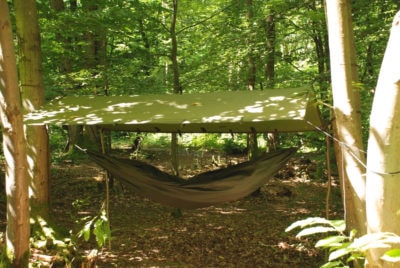 Tarp Set Ups Are Often The Lightweight Shelter Of Choice