Home Articles The Root to a Good Meal

The Root to a Good Meal

In the wild diet starchy carbohydrates are difficult to find at least in the woods and hedgerows and in any meaningful quantities. A quick glance through any wild food book reveals lots of salad options but few veg to really get your teeth into. Springtime does however reveal energy laden roots and despite the sudden halt in growth caused by the recent cold spell there are still good things to be found.

Lesser celandine is a perfect spring plant and to me a real indicator that things are beginning to change. It is to be found in many locations from ancient woodland to road side banks, as a member of the buttercup family its bright yellow flower can be a great help in identification. It is the starchy root nodules which provide the meal and in this case the root’s appearances lends itself to one of its other common names of pilewort. This description stems from the doctrine of signatures a medicinal belief system whereby plant parts resembling bits of the human body where considered beneficial for that part of the body. Celandine roots where reckoned to be very good for the treatment of haemorrhoids but I will let you make your own mind up about this. Incidentally if you chat to herbalists they would suggest that the doctrine of signatures choose features on the plants which reminded the physician of its effectiveness, perhaps, if this is indeed the case there is more wisdom in this way of thinking than may first appear.

A second great spring root is the cattail often times called bulrush, in fact it’s a year round restaurant and can give a meal at any time of year. It is the rhizome that we would be interested in April. This starchy food store is packed full of good carbohydrate which can be accessed using techniques as simply as heating the rhizomes directly in the fire and then sucking out the starch, or a more involved extraction using hot water, followed by settling it out and drying as a kind of flour. The other great benefit of cattail is its abundance, as a succession plant it is desperate to try to dry up ponds and can be found in huge quantities. This would have been very important to anyone trying to live from the land as many calories can be lost in the pursuit of food.

Burdock is another plant which starts to make itself known in the month of April and although all of the plant is edible the leaves are exceptionally bitter. Cooking does remove this bitterness however. The prize of the plant is the root system which even raw is, in my opinion quite delicious. The root can be huge and once the fibrous outer rind is removed can be treated as any root vegetable. It is a biennial plant and should therefore be harvested at the beginning of its second year or at the end of its first, the root will have maximum nutrition at these times. Digging from nice deep and soft soil will also reveal larger roots. It is also possible to burn more calories that can be taken from the plant by digging in a hard or stony area.

Pignut is a real gem; its feathery foliage is an indicator not only of spring but also ancient woodland. Its below ground parts are of interest to the forager forming a nut similar in texture and taste to sweet chestnut but with a hint of radish.

As with all foraging please seek landowners permission, avoid protected plants and gather from far and wide to so as not to put to much pressure on local populations. After all you may wish to come back for more in the future. 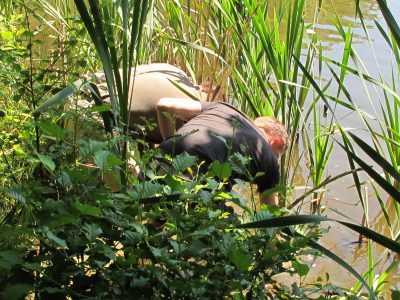 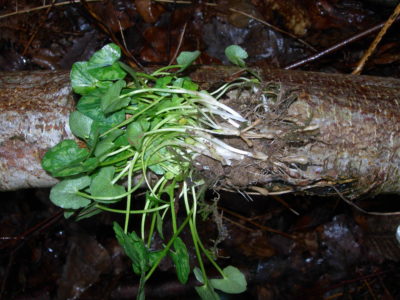