Home Articles The Importance of Hedgerows

The Importance of Hedgerows

Hedgerows are an artificial habitat most of which were created in the 18th century as modern agricultural practices began to form. It is thought however, that they may date back at least to Iron Age settlements and were used as boundary markers as well as a method of controlling livestock. Today they form a vital part of our woodland ecology as they mimic the woodland edge habitat. Edge habitat is also referred to as the transition zone and is frequently very rich in species forming where one habitat meets another. Visualising the intertidal zone on the coast helps understand this principle as these rich environments occur where the sea meets the land. Together with providing growing conditions for many of our woodland plants, hedgerows also provide nesting places for songbirds, havens for dormice and allow movement of wildlife from one area to another. Wildlife in this context includes plants and animals.

Woodland fragmentation is a big issue in the UK with many of our oldest and most species rich forests becoming small and isolated. The wildlife in these fragments can quite easily suffer from all of the problems associated with island populations, low resistance to disasters and a general threat to genetic diversity. Hedgerows allow migration between areas in case of manmade and natural changes in woodland structure and re colonisation of suitable habitats.

A few decades ago many of our hedges where grubbed out under a government sponsored directive. The plan was to increase the size of our field systems, bring in bigger machines and grow more crops. The wildlife as usual, suffered immensely but so did the very soil itself. The top soil in places such as my home county of Lincolnshire can still be seen forming drifts at the side of the roads with nothing to stop the wind striping the surface away. Happily things have changed with encouragement offered to landowners to reinstate hedgerows for the future.

Like any habitat however hedgerows need management and without intervention they rapidly turn into rows of individual trees. The proximity to each other means that the lower branches of the plants are always fighting for light, as the tree mature the upper canopy overshadows the lower branches even more. If a part of a tree receives little light it becomes superfluous to the tree, after all a leaf is just a light dependent sugar factory, and the tree allows it to die off. This is all very normal and natural but for a hedgerow it means gaping holes and a loss of both stock proofing and sheltered refuges for wildlife.

This hollowing out can be slowed by careful trimming in relation to the path of the sun but eventually more drastic action is required. Very undermanaged hedges may contain many dead trees and sometime in these situations the only answer is to coppice the entire area and replant in the gaps. The vast majority however can be given a new lease of life by the traditional management practice of cutting and laying.

Hedge laying styles vary from region to region seemingly depending on the livestock traditionally farmed in that area. It also seems dependant on the resources for staking and securing the hedge and how abundant they are locally. Most styles are very similar and involve the partial severing of the individual tree stem. Enough is left intact to insure flow of nutrients and sugars and to hold it securely to the stump. The stems are then bent over at and angle of roughly forty five degrees, each subsequent stem lying on top of the one that went before. Stakes are then placed in the centre of the laid hedge to stop any sideways movement while a woven binding secures the top. The trees continue to grow; new shoots arise from the stumps. Light is allowed back into the bottom of the hedge and all of the gaps are filled. Hopefully what is left is now a stock proof barrier and a perfect wildlife habitat. It is important to cut the stems low to the ground to fill in the gaps as the trees come over. This is quite a skill in itself but perhaps the hardest decision throughout the process is deciding which trees should be left in to form the neatest finish. Invariably there is too much density in the average hedge and as much as 30% may need to be removed.

This is the general process for most style of hedgelaying with all the stems laid the same way and uphill. Exceptionally in the West Country version stakes and bindings are not used, presumable because of a general lack of woodland products, and the individual stems or pleachers are laid in all directions. Normally hedges are left quite high although this is dependent on how tall the individual trees are to start with. Generally a hedge of around six feet in height prior to the work starting should give a finished product of three – four feet in height. The West Country hedges are laid flat to the ground presumably due to the wind exposure and threat from lack of staking.

In some areas of countryside management there maybe doubts that the management carried out is the best possible practice for a given area especially when lack of management is often the issue. Hedgelaying is an exception to this, it is pretty much the best thing you could ever do to a neglected and out grown hedge and a skill which should be revived and learnt by all countryside managers. It is also extremely satisfying and one of the crafts I still try to make time for despite my busy teaching and surveying profession. 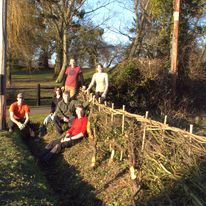